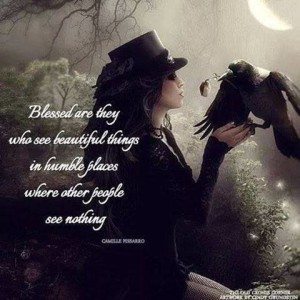 For all of you reading this, Raven wasn’t my given birth name, but it is a very important name that was given to me later in life by a very dear friend of mine and by others in what they said about me growing up in life. Reading about the Native American Totem of the Raven, I came to realize that the things people would say about me was related to the Raven. When people think about The Raven, they look at it as a bird of despair, but that could not be further from the truth. According to Native Americans, the Raven was the seeker of truth and shined light onto their truth. The Native Americans also shared their deep dark secrets with the Raven. Having learned about the Raven, I learned a lot about myself. From childhood to present, many people have come and shared their problems. I would shine a light on the issue and together we would work on the solution. Along with this, people have always trusted me to keep their secrets as well. From a young age I have had contact beyond the realm of earth with higher spirit and brought forth a loving, truthful message when someone was basking in the darkness.

According to the totem, “Raven’s wisdom includes introspection, courage, self-knowledge, magic, healing, creation, rebirth, keeper of secrets, master magician, shape-shifter, mysticism.” “The Raven s a messenger between the higher self and the sub consciousness of oneself. She brings light into a dark situation. I look to The Raven as a sort of muse to encourage people to do what makes them happy from a loving, non-judgmental space. As I grew up I notice people who would cross my path would connect for a while, and then that person went on to do great things, and I would move on.

Just like The Raven, I too have brought magic into many people’s lives.
It was not me though it was spirit working through me…

My Other Sites and Links

"When the Japanese mend broken objects they aggrandize the damage by filling the cracks with gold, because they believe that when something's suffered damage and has a history it becomes more beautiful." -- Barbara Bloom
Follow